Gilbert & George are a London-based contemporary artist duo known for their philosophy of creating art for all.

Gilbert Proesch, born in Italy in 1943, and George Passmore, born in the UK in 1942, became artistic partners and lovers while studying sculpture at St Martin's School of Art in London. The duo is known for their vast body and variety of artworks as well as their odd, formal appearance and manner. After their 1970 performance of The Singing Sculpture, the pair began to regard themselves as living sculptures and began to see everything they did as artwork, refusing to disassociate art from their everyday lives. Their large-scale photographs called The Pictures, include images of the artists themselves, flowers, children, friends, and symbols of Christianity. The pair represented the UK at the 2005 Venice Biennale.

The Tate Modern's 2007 Retrospective of Gilbert & George's work, spanning over thirty years of their oeuvre, was the largest exhibition of any artist's ever held at the London museum; it travelled in 2009 to the Brooklyn Museum of Art, among others. 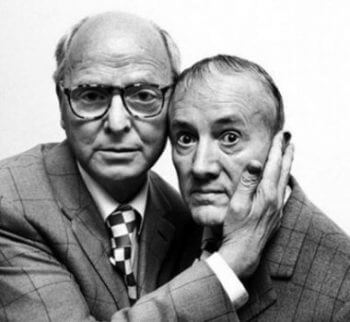