Thomas Ruff's photography suggests the possibilities of his chosen medium, as he might use digital manipulation for one subject and antiquated darkroom techniques for another. Ruff works in series, creating defined bodies of work whose subjects include empty domestic interiors, appropriated interplanetary images captured by NASA, abstractions of modernist architecture, three-dimensional computer-generated Pop imagery, and obscured pornography. Ruff's portraiture series of the early 1980s featured groupings of large three-quarter portraits like so many passport photos. Though these, like many of his photographic series, seem to beg a sociocultural interpretation, perhaps the most constant feature in Ruff's career is his disavowal of such a reading. Instead Ruff focuses on aesthetics and process, building an eclectic oeuvre not defined by genre, method, or theme, but rather by stark imagery, relative conceptual seriality of subject, and the clever subversion of the printed image.

Thomas Ruff (b. 1958, Zell am Harmersbach, West Germany) lives and works in Düsseldorf. 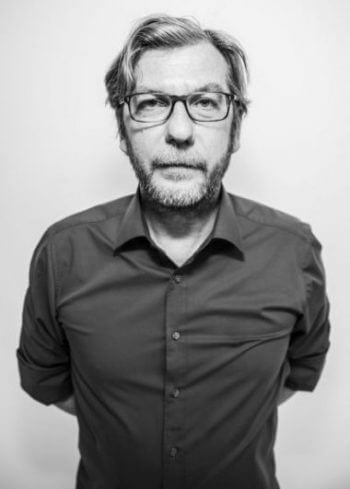